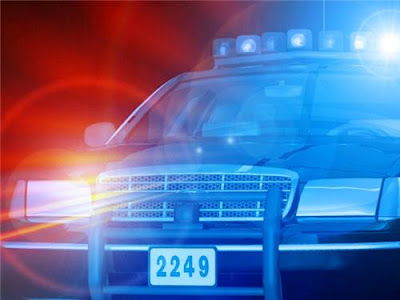 Grand Rapids-based forensic pathologist Stephen Cohle was one of two witnesses to testify Monday in Joni Holbrook's preliminary examination. Holbrook is charged with an open count of murder in the Aug. 10 shooting death of her husband, Melvin Holbrook.

A preliminary examination is held to determine if there is enough evidence to send a case to trial. It is scheduled to resume Oct. 12 in front of Benzie District Judge Nancy Kida.

Investigators believe Joni Holbrook shot her husband with his state police-issued pistol in a bedroom of the couple's Benzie County residence. She allegedly told police she shot him as he slept, and examiners removed three bullets during an autopsy.

Cohle, who conducted the autopsy, provided details about the gunshot wounds. One bullet entered the back of Holbrook's head and lodged at the base of his skull, and another went through his jaw and into his shoulder.

Holbrook had what appeared to be entry and exit wounds near his right elbow and another on the right side of his chest, and Cohle believes one bullet struck him near his elbow and continued through his arm into his chest.

Under cross-examination from Holbrook defense attorney Jim Amberg, Cohle said it's possible Holbrook was holding his right arm up in a "defensive posture" when that shot was fired.

But it's also possible Holbrook slept on his side with his arm exposed, Cohle said, and there's no way of knowing if he was asleep. Cohle said at least two of the shots likely were fired within four feet of Holbrook, based on gunpowder residue and soot.

Benzie Sheriff's Department deputy Mark Ketz, who responded to the scene, also testified. Ketz said he found an empty pistol holster inside a car in the home's attached garage during a search of the residence.

Ketz also interviewed Holbrook's first wife, Starr Mangold. Ketz said she described Melvin Holbrook as a "controlling" and "manipulative" person who had an interest in "strange" sexual behaviors, including bondage.

Joni Holbrook's attorneys previously said she was subject to "physical, mental and sexual abuse" from her husband during their marriage, though she told a 911 dispatcher she wasn't fighting or arguing with her husband at the time of the shooting.

The Traverse City Record-Eagle reported Saturday a retired former fellow trooper told investigators then wife Starr Ann Holbrook shot at him with a MSP-issued gun on July 23, 1987 at their Coldwater area home. She missed.

Last month, current wife Joni, called police to tell then she killed Melvin in their Benzie County home while he slept in just after 1 a.m. Aug. 10.

The complete story appears in the Monday, Sept. 28 edition and is available at coldwaterdailyreporter.mi.newsmemory.com.

New Details On Murder Investigation
There is new information into the shooting death of a Michigan State Police Sergeant.
Up North Live
By Roxanne Werly
Friday, September 25, 2009 at 2:42 p.m.
http://www.upnorthlive.com/news/story.aspx?id=355050

No one was hurt in the 1987 shooting and according to the report the sergeant did not want to press charges. The couple divorced in 1992 and Holbrook remarried in 1999. In August Sergeant Holbrook was shot and killed at his Benzie County home.

Joni Holbrook has admitted to shooting and killing her husband, and she is currently being held in the Benzie County Jail on an Open Murder Charge.
Joni Holbrook's attorney Jesse Williams says this is not a coincidence. He says he's concerned why charges weren't filed when the first shooting took place and concerned with the lack of an investigation. Williams says had it been investigated properly his client, Joni Holbrook, would not be in the situation that she is in today.

Joni Holbrook is due back in court on Monday.

TRAVERSE CITY -- In July 1987, the then-wife of Michigan State Police Sgt. Melvin Holbrook turned his service weapon on him and fired two shots, an incident that preceded by two decades Holbrook's shooting death, allegedly by another wife.

Details of the 1987 shooting in Branch County emerged from police interviews and document searches during a probe of Joni Holbrook, who's accused of shooting Melvin Holbrook to death as he slept early Aug. 10. Melvin Holbrook was assigned to the Traverse City post at the time of his death.

His wife is being held in the Benzie County Jail on an open count of murder. Police believe she shot him with his service weapon in the couple's home in Benzie's Homestead Township.

Holbrook's preliminary examination, held to determine if there is enough evidence to send the case to trial, is scheduled for 1:30 p.m. Monday.

Melvin Holbrook was not injured in the 1987 incident, and his then-wife, Starr Ann Holbrook, was not charged with a crime.
Police investigating Holbrook's death contacted several former staffers at the state police post in Coldwater, where Holbrook, 53, served after graduating from police recruit school in 1986.

Retired troopers told of a July 23, 1987, incident in which Starr Ann Holbrook shot at him with a state police-issued gun as he arrived home from work. The couple was separated at the time, reports indicate, and Starr was at his Coldwater residence.

Melvin Holbrook arrived home shortly before 11 p.m., according to a supplement he filed with the original 1987 police report. As he was in the driveway emerging from his car, he saw his wife step outside with his service revolver.

She shot and hit the driveway seconds after he got back in his car and backed up, according to the report.

"The bullet from the handgun would have hit either the vehicle or me if I had not started backing from the driveway," Holbrook wrote.

She fired a second time as he drove away and headed back to the post to report the incident. He didn't request criminal charges, according to the report, and Branch County records don't show any charges.

Starr Holbrook recently acknowledged to a Benzie County Sheriff's investigator that she was involved in the incident, reports obtained by the Record-Eagle show.

Reports do not indicate a clear motive for the shooting, though Melvin Holbrook wrote that he recently had informed Starr he intended to divorce her.

A retired trooper told investigators "it was clear from statements made by (Melvin) Holbrook that his wife had become upset upon finding out" he had been dating another state police trooper.

Posted by survivor at 3:52 PM No comments: 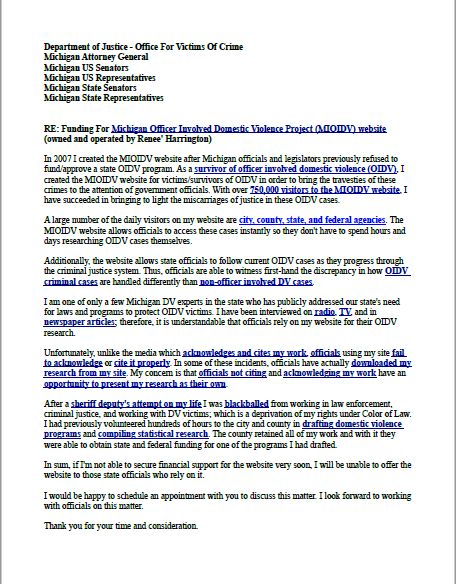